Estonia is the northernmost of the three Baltic states, bordering Latvia in the South and Russia in the East, while the Southern tip of Finland is just a stone’s throw away across the sea. Estonia is one of the least-populous countries in Europe, with just 1.3 million inhabitants. About a third of the country’s population live in its capital, Tallinn.

Estonia has spent much of its history under foreign rule, most recently as a part of the Soviet Union. Having regained its independence in 1991, Estonia has oriented strongly towards Western Europe and reformed and modernised itself with impressive success.

The government’s push for innovation, digitisation and the removal of bureaucracy has born fruit. Estonia is today one of the most-prosperous former communist countries, where a modern, open-minded society enjoys a high standard of living. In this context, the English proficiency among locals is also remarkably high. It therefore does not come as a surprise that Estonia regularly ranks among the best European countries in the “Ease of doing business index” by the World Bank Group. Over recent years, Tallinn has become an exciting hub for startups. All in all, Estonia is an attractive destination for international students, with many study options available.

Overall, there are about two dozen institutions of higher education in Estonia. At 10 of those, you can study in English.

When you make the choice to study in Estonia, you should use the chance to explore the country as well as its Baltic and Nordic neighbours.

There is a dense bus network across the country, making it relatively easy to reach all bigger cities. Buses are also the most convenient way to explore Latvia and - a bit further to the South - Lithuania.

The ferry ride between Tallinn and Helsinki, Finland’s capital, only takes 2 hours, and with numerous connections per day, the route is one of the busiest in Europe. If you’re eager to spend some extended time on the water, you can also take a ferry to Stockholm (Sweden), taking roughly two days.

Estonia’s only meaningful airport is the one in Tallinn, with dozens of connections to the largest cities in Europe, including global airport hubs like London, Helsinki or Munich. 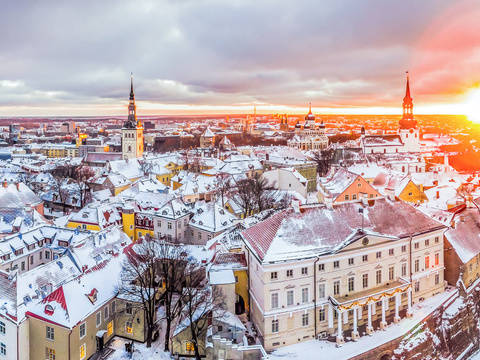