With its colourful history and its important geographic location, Lithuania is the bustling connecting hub between Western and Eastern Europe. The small nation with a population of just about 2.8 million has been an EU member since 2004 and, in 2015, adopted the Euro as its official currency. Over the past two decades, Lithuania’s education system has seen exciting reforms. Today, there are hundreds of interesting English-taught study options available to international students.

There are more than 30 institutions of higher education in Lithuania. Similar to countries like Germany, the Netherlands, or Finland, the system distinguishes between universities and university colleges (kolegija), often also called “universities of applied sciences”.

Through the Bologna process, Lithuanian universities have adopted a Bachelor / Master structure for its academic programmes. The awarded degrees are recognised throughout Europe and globally.

Citizens of EU member countries do not need any special visa to study in Lithuania. All others may have to apply for a Temporary Residence Permit ("TRP") through the Lithuanian Migration Department.

For EU citizens, tuition fees in Lithuania typically range from 1,000 to 5,000 EUR per year for a Bachelor's degree and 2,000 to 6,000 EUR per year for a Master's degree, while doctorate programmes come in at a higher range of 7,000 to 8,000 EUR annually. Students from outside the EU may be subject to different tuition fees, depending on the university and programme. If you study at a university in Lithuania, you may be eligible for a state scholarship to cover the tuition fees. Tuition fees do not apply to students on exchange programmes.

One striking advantage for those who choose to study in Lithuania is the remarkably low cost of living. Student accommodation can be had for as little as 100 EUR per month. All in all, including food, books and leisure activities, students can easily get by on a budget of 500 EUR per month or less.

Lithuania is a modern economy with a an global mindset, and a lot of international companies have offices in the country. But even though English proficiency is reasonably high, especially among younger people, speaking Lithuanian may still be the biggest hurdle for foreigners seeking employment. If you consider staying after graduation, your best bet is to take a Lithuanian language course early on so that you can improve your odds competing with local job applicants.

Lithuania is located in Northern Europe, in the southeast of the Baltic sea. Lithuania shares borders with Estonia, Latvia, Poland and Russia's Kaliningrad exclave. There are four commercial airports in Lithuania, of which Vilnius Airport - in the country's capital - is the largest with over 30 international flight destinations. 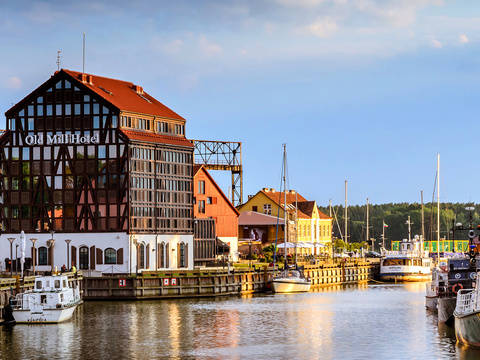