Here’s why you should study Software Engineering in Berlin, Germany

Here’s why you should study Software Engineering in Berlin, Germany

Berlin is a great student city

With 165,000 students, Berlin has the largest student population in Germany. There are dozens of universities offering many Bachelors and Masters programmes in English. Some of these universities rank among the world’s best, such as Freie Universität Berlin, Humboldt University and TU Berlin.

Studying in Berlin also means enjoying a wide array of leisure activities. The city’s cultural offerings as well as its nightlife are world-famous, if not notorious - the latter having cost many a student a decent exam grade now and then.

There is another fact Berlin has going for itself: The city is relatively cheap when compared to other German cities, and extremely cheap when compared to other Western European capitals like London or Paris. That is especially true if you don’t mind living a bit further from the city’s central quarters like Mitte or Kreuzberg. After all, Berlin also enjoys a dense network of public transport options with buses, trams, subways and commuter trains. Although about half of that network breaks down at the first sight of a snowflake in late November, getting from A to B is cheap and uncomplicated.

Germany’s capital has spawned countless startups; among the biggest success stories of recent years are giants like Zalando, Wooga, Soundcloud or Delivery Hero. And major US startups have decided to make Berlin their German or European HQ. In fact, Berlin is among the fastest-growing startup ecosystems in the world and well on its way to become Europe’s most important hub for tech companies.

These companies are all driven by technology, and so skilled software developers are in high demand. That means that, in Berlin, you will quickly find a job - both as a student and after graduation.

A case in point for startups and technology meeting education is the new private CODE University. Only recently founded, starting teaching in autumn 2017, it offers specialised Bachelors programmes in Software Engineering, Interaction Design, and Product Management. They have also received praise for their innovative tuition model, which allows students to delay payments until after finding a job.

Berlin’s appeal attracts internationals from all over the world: Not only foreign students, but people seeking new career options in an exciting environment.

In certain areas of Berlin, you are more likely to overhear conversations in English than German. The city’s strong community of expats means that it will be easy for you to make connections and find friends.

The German capital is also conveniently located for exploring other places in Europe: By train or by plane, you can travel across the continent, sometimes for less than 100 euros per round-trip.

This article was produced and published in cooperation with CODE University. 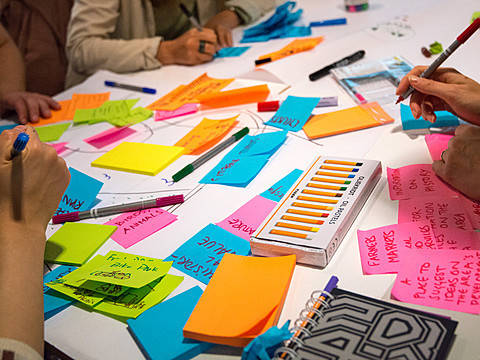 Career in UX: What to study to become an Interaction Designer