Some of the best beer and chocolate on the planet, enchanting medieval cities, a multicultural society and more than 13,000 square kilometers of festival ground – sounds interesting?

Then let’s talk about Flanders: The Dutch-speaking region of Belgium has a lot to offer to international students. Here are the top 8 reasons why you should consider Flanders as your study abroad destination:

(A little terminology to start with: The region is called Flanders - “Vlaanderen” in Dutch; anything in or from Flanders is called Flemish - “Vlaams”; and Flemish people are Flemings - “Vlamingen”.)

The most important reason why you should study in Flanders first: You can get a high-quality education in English, and your tuition fees will be lower than in other traditional destinations.

Yet studying in Flanders is if not free, then at least very affordable:

Also, it will be easy to find English-taught programmes in various disciplines. The number is limited, but growing. Belgium is still an insider’s pick - where the neighbouring Netherlands attracts lots of international students, you can get a similar study-abroad experience in Flanders at lower cost and much fewer problems finding student accommodation.

(The second list is limited to the Flemish institutions in Brussels - there are also primarily Francophone universities that offer Bachelor and Master programmes in English.)

Another reason to study in the Flanders region is its position at the heart of Western Europe. Brussels, the capital, is geographically part of Flanders – although technically, it constitutes a different region of Belgium, the Brussels-Capital Region.

Belgium is generally a great place to explore other corners of Europe: Paris is a couple of hours away, and so is Amsterdam. Germany and the cities of Cologne and Bonn are close. Thanks to the Channel Tunnel, and depending on where you depart from, you can even get to London by train in around two to three hours!

You know what this means: not only an international atmosphere, but also all of your weekend breaks sorted!

The primary language spoken in Flanders is Dutch; in a local context sometimes referred to as Flemish Dutch or simply Flemish.

But Flemings are multilingual and internationally-minded: French is widely spoken - as it’s also an official language in Belgium - and so is English. Many people speak three or more languages! The region is a proper melting pot; especially in cities like Antwerp (home to one of Europe’s three largest harbours) you’ll find people from all over the world.

Reason 4: The cuisine - it’s not just chocolate, beer and fries! 🍫

Belgium is rightly famous for its chocolate, beer and fries: The country has over 320 chocolate shops and Brussels, in particular, prides itself on being called the world capital of chocolate. As for the beer, even UNESCO is a fan: Belgian beer culture was added to the list of the intangible cultural heritage of humanity. Local fries are also worth checking out - but don’t call them “French fries”, the locals would quickly point out that they should be called “Belgian” or “Flemish fries”.

However, if you are really that afraid of getting tired of a diet of chocolate, beer and fries, remember that in multicultural Flanders you will easily find food from all over the world. And if you want something Belgian beyond the stereotypes, the locals would recommend mussels and vol-au-vent.

You don’t need to go to Southern Europe to enjoy the al fresco culture: When the sun is out, the Belgians love to head out to bars and restaurants with terraskes, terraces, to have drinks and food with family and friends. It is such a common thing to do that it has its own phrase: een terraske doen.

Brussels, the capital of Belgium and de-facto capital of the European Union, is a wonderful city to explore and doesn’t need any introduction. But there is a lot more that Flanders has to offer.

Very few people can manage to watch the movie In Bruges and not fall in love with the setting. Bruges (or Brugge in Flemish), is one of the top tourist destinations in Flanders, and the canals, cobbled streets and well-preserved medieval buildings of its city centre have been declared a World Heritage Site by UNESCO.

Flanders is full of picturesque places with their own unique charme. Ghent, home to Ghent University, is another famous destination. And so is Leuven, where you will find KU Leuven. Antwerp, on the other hand, is a more modern, vibrant metropolis. And because Belgium is so compact, everything is just a short train ride away, regardless of where you study!

Belgium is well-known for its many popular comic series. Strictly speaking, many of the big ones are Franco-Belgian (Tin Tin, The Smurfs), but the comic culture in Flanders has also been vibrant - think Lucky Luke or Nero, for example. And to this date, a substantial share of all book publications in Belgium are comics. A visit to the Belgian Comic Strip Center in Brussels is an absolute must when you study in Belgium!

If you are more into live music and festivals, Flanders will not disappoint either: There are more than 13,000 square kilometers of festival ground across the region, and literally hundreds of festivals, with internationally popular ones like Tomorrowland, Pukkelpop, or Rock Werchter.

Having a bike in Flanders is not only a way to get to and from university. With a number of scenic cycling routes across the region taking you from the coast to the historic cities, it is also a great way to spend your weekends and semester breaks. A host of cycling events also make the Flanders region a paradise for bicycle race aficionados. It’s no wonder that some of history’s greatest cyclists were from this region! 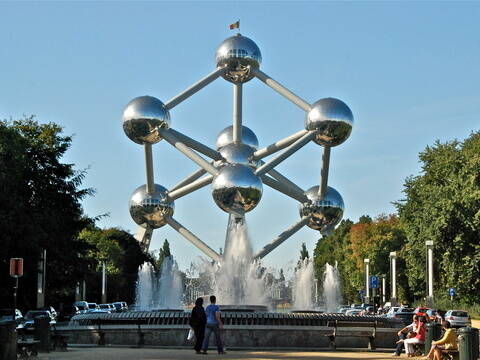