Hamburg, 1 July 2020. A new survey by study choice platform Study.eu reveals that, if charged fees at the international level, as many as 84% of EU students looking to study in the UK would plan to look for alternative destinations. This could mean a loss of 120,000 students based on recent enrolments, or 25% of all non-UK students.

Last week, the UK government announced that, following Brexit, students from the EU would lose the “Home” fee status in England from 2021/22, as well as access to public student loans. Charged at the “International” level, this would effectively mean an average fee increase of around 99%. Current International tuition fees for most university courses are set between 75 and 125% higher than Home/EU fees.

Even at Home/EU fees, British universities are already the most expensive in Europe. While EU citizens can find tuition-free or substantially cheaper options in multiple countries across Europe, many continue to flock to the UK for its high reputation.

With EU students charged higher amounts in the UK, it is expected that outbound British students will also be faced with higher tuition fees in countries like the Netherlands, Sweden, or Finland. 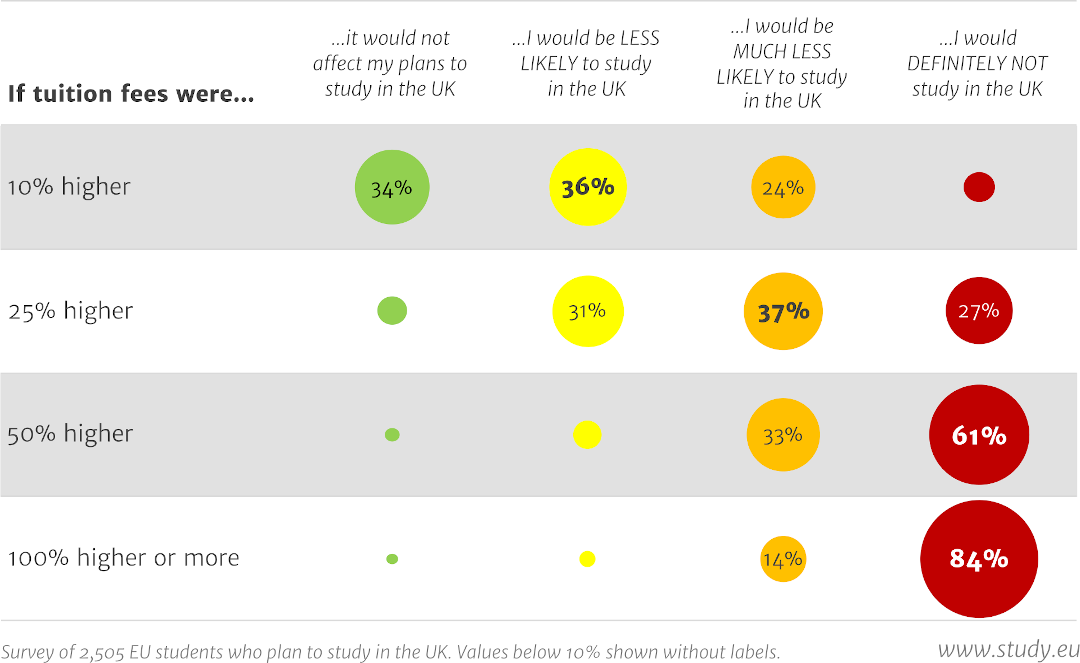 “A lose-lose situation for everyone”

The survey asked students to rate how likely they would be to continue with their plans to study in the UK if fees were to rise by 10, 25, 50, or 100% or more; the latter serving as a proxy for the average fee premium charged from international students.

“This is a lose-lose situation for everyone. It is unfortunate that the political process leads to such negative consequences for students and universities. We hope that some other solution can be found that would promote student mobility between the UK and the EU,” comments Gerrit Bruno Blöss, CEO of Study.eu.

“Beyond the already shocking numbers, British universities have to consider potential domino effects. Less diverse campuses might overall be less appealing to international students, regardless of fees charged.” The proportion of international students is also a factor in popular university rankings such as those published by Times Higher Education or QS.

In recent years, continental European universities have been increasing the number of English-taught courses, and more so since the Brexit referendum in 2016. 49% of surveyed students said that, with the UK potentially becoming too expensive, they would consider studying in the Netherlands, long a frontrunner for university internationalisation. Other popular alternatives include the mostly tuition-free Germany (36% of respondents), France (19%), Ireland (16%) and Sweden (14%). Higher-fee destinations like the USA, Canada or Australia were only seen by few as alternatives. 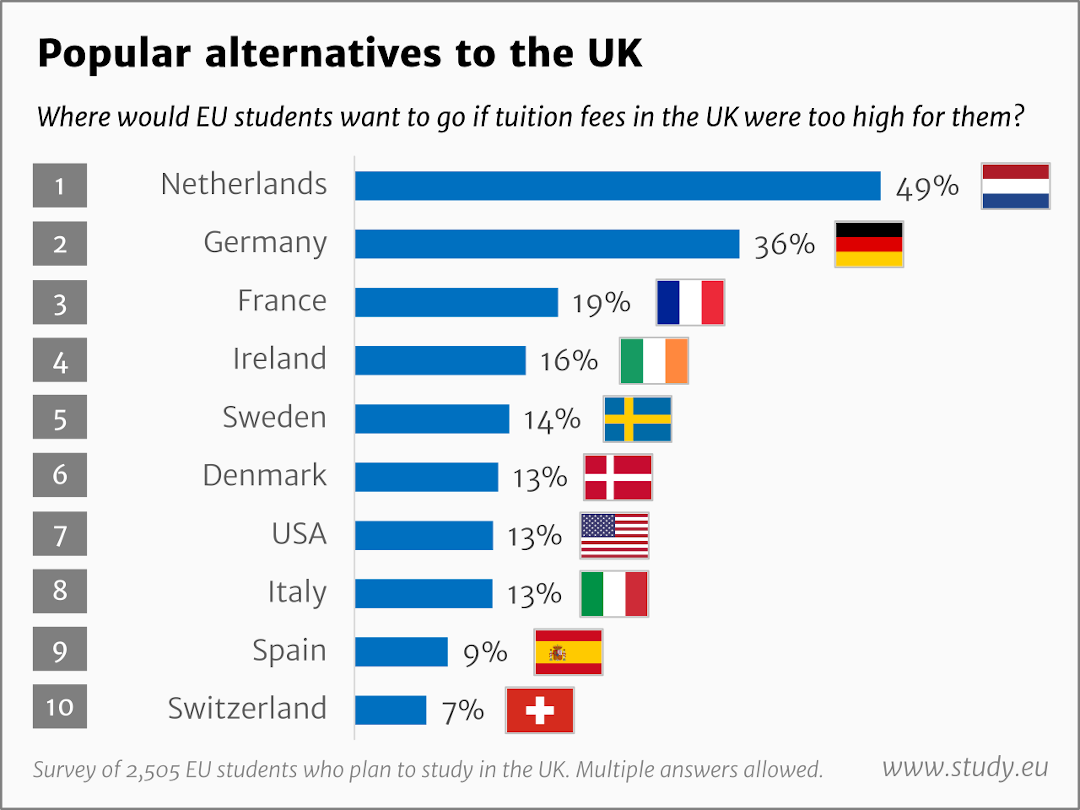 How are UK universities likely to react?

Universities in the UK largely rely on tuition fees charged from foreign students. The potential loss of earnings from EU students will follow an already critical situation, with the coronavirus pandemic impeding international recruitment. Many universities will be forced to react in the coming months and years.

“We will see a range of reactions,” comments Blöss. “Most universities have been overhauling their marketing and recruitment campaigns for a while. After all, the announcement did not come unexpectedly. Some may shift focus to more affluent origin countries. At the same time, some are planning to open satellite campuses in continental Europe, to offer degree programmes in trans-national education settings. A few institutions are also evaluating potential legal loopholes to charge different fees.”

“Britain’s universities have a lot to offer, but they are facing strong competition on the continent. If they want to continue to attract students from the EU, they will need to communicate their excellent value proposition and make it clear that EU students are still welcome.”

The survey was conducted 23 June to 28 June 2020 among 2,505 respondents who are nationals of the EU and indicated plans to study in the UK to obtain a Bachelor’s or Master’s degree, in a sample representative of nationalities and study levels of EU students in the UK as of 2018/19.

Study.eu is the gateway to universities in Europe. As the most-visited study choice platform for Europe, it reaches two million students per year. The Hamburg-based company connects students from around the world with European universities, enabling them to pursue the academic path they aspire. Study.eu closely cooperates with institutions of higher education as well as governmental organisations throughout Europe.