The number of students from the US investigating study options in Europe has increased significantly since the decision on Dobbs v. Jackson Women’s Health Organization on 24 June. “The Supreme Court’s ruling triggered a sudden surge in interest from American students. Going to college in Europe - and potentially staying after graduation - is becoming a more interesting alternative,” says Gerrit Bruno Blöss, CEO of Study.eu. “Geopolitical events like elections often result in short-term changes in student interest, typically for one or two days. But in this case we’re observing a robust shift: Interest from the U.S. has been stronger than expected ever since the ruling.” 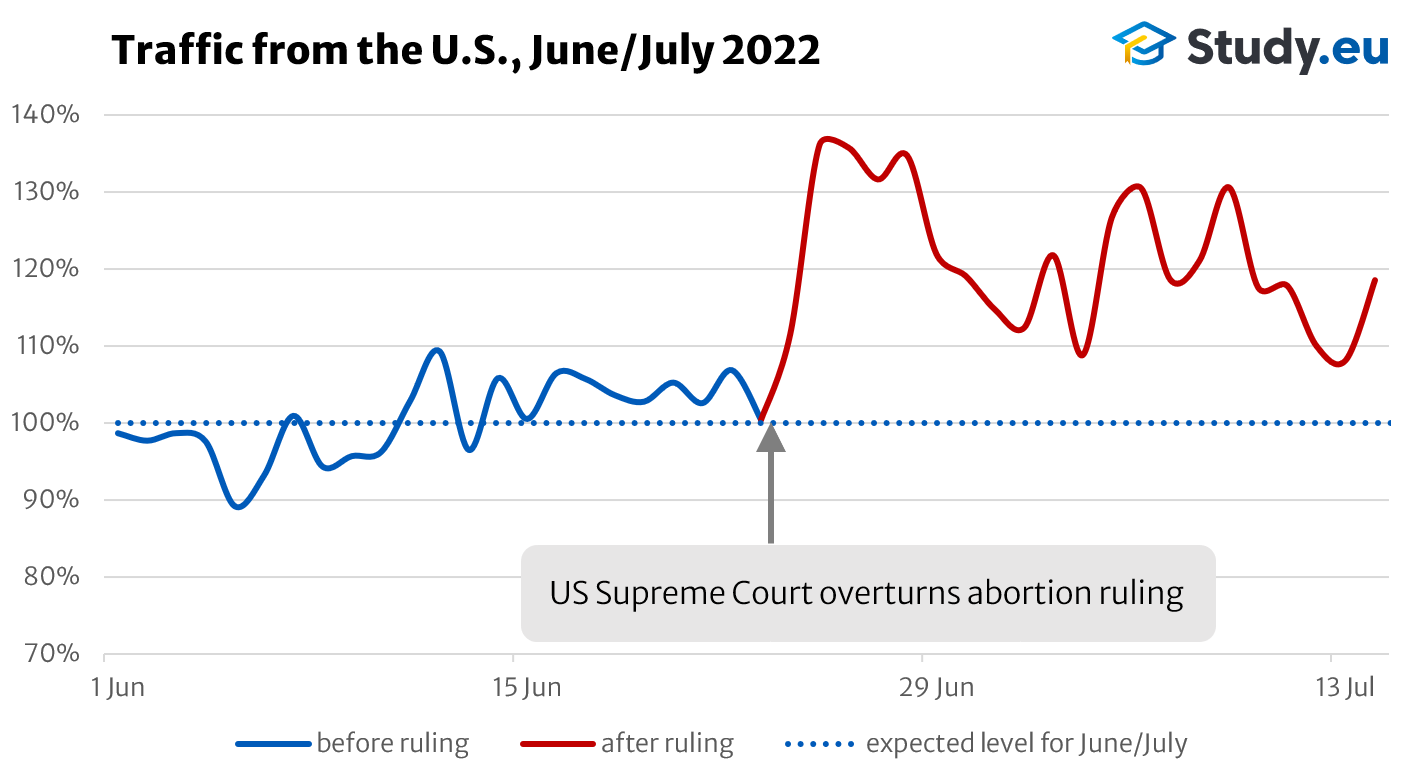 Generally, students from Blue States like California or New York are overrepresented among Americans doing an exchange or seeking a full degree abroad. “We would have expected interest from the thirteen trigger-ban states to rise more than in the rest of the country, since young people there are more likely to be affected by this ruling and may feel stronger about implications of future SCOTUS decisions,” comments Study.eu Analyst Sara Sánchez. “But the opposite was true: Platform traffic from those states has grown by 8%, compared to nearly 20% all over the United States.”

Prior to the coronavirus pandemic, nearly 60,000 U.S. students were pursuing full degrees abroad, a number that had been on the rise for years and is expected to grow further in the future. (IIE; Open Doors) In Europe, American students primarily look for universities in Germany, the United Kingdom, Spain, and Scandinavia, as Study.eu data indicates.

Germany and the UK in particular have long been popular destinations for students seeking full Bachelor or Master degrees. Both countries are home to dozens of highly ranked universities with programmes taught fully in English - at German public universities completely tuition-free even for foreign students. And both have strong economies with job options for English speakers and friendly immigration rules for foreign graduates.

The Supreme Court ruling is also likely to affect how international students view the United States as a study destination. Sector stakeholders expect that students will be reevaluating whether to study in the U.S. or another country. (PIE News) During the previous administration, a similar trend in declining interest from foreign students was described as the “Trump Effect”. (Washington Post)

Midterms will affect how many American students will apply abroad

“The full effect of unpopular Supreme Court decisions on student behaviour will not be seen before 2023. Most European countries had already closed university applications for fall 2022, with few exceptions like Austria or the United Kingdom,” says Gerrit Bruno Blöss. “And going abroad for a degree is not a decision that students make on a whim: They typically start planning a year or two in advance and often include their parents in the decision making process. If students are concerned about a more conservative SCOTUS and what that means for themselves, it’s fair to assume that the midterm elections in November will also affect how many will follow through with the plan of studying abroad.”

Study.eu is the gateway to universities in Europe. As the most-visited study choice platform for Greater Europe, it offers students details about more than 15,000 study programmes at more than 1,000 universities. Every year, the Hamburg-based company reaches more than 2 million prospective students from around the world. American students represent the second-largest user group at circa 10% of the global total. Study.eu closely cooperates with institutions of higher education as well as governmental organisations throughout Europe.