Norway: Tuition fees might drive away up to 80% of non-European students

Norway: Tuition fees might drive away up to 80% of non-European students

Hamburg, 8 November 2022. As university tuition fees are being discussed in Norway, a new survey shows that the country might lose between 70 and 80% of its degree-seeking students from outside the EEA/Switzerland.

Study.eu, the European study choice platform, surveyed 1,027 students from outside the EEA / Switzerland who indicated interest in studying in Norway. When asked why they were considering Norway, “tuition-free study options” were listed near the top reasons (74% of respondents) alongside the reputation and quality of Norway’s universities (75.6%) and its notably high quality of life (52.7%). 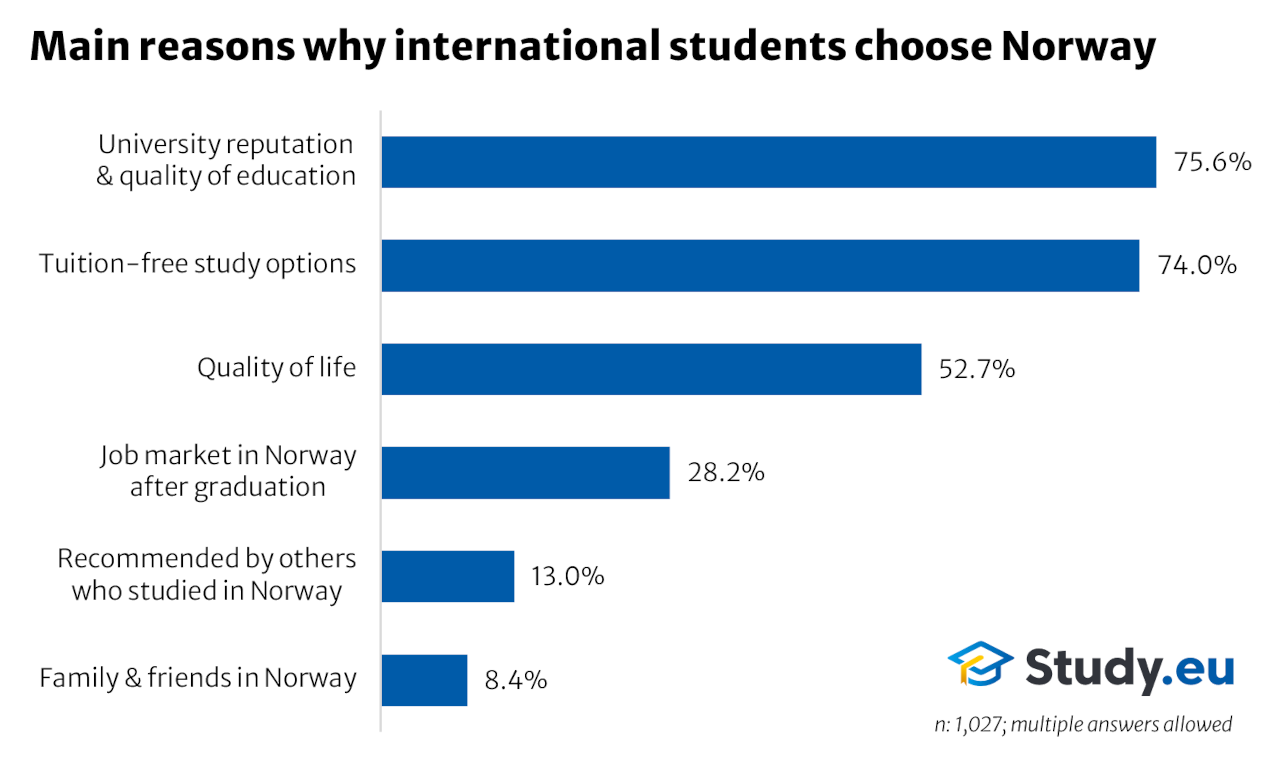 Fees will drive students away from Norway

In 2020, Norway hosted nearly 13,000 international students (OECD). Of these, 65% came from countries outside the EEA/Switzerland, the top sending countries being China, Nepal, and India. Introducing tuition fees could mean losing a substantial number of these students in the coming years.

The Study.eu survey found that while up to 33.9%  of prospective students would still “likely” or “very likely” be able to afford fees of up to 50,000 NOK per year, already at 100,000 NOK, 63.8% indicated it would be “impossible” to afford studying in Norway. This went up to 79.6% for fees of 150,000 NOK per year and 85.4%  at 200,000 NOK per year. At the average fee level suggested by the Norwegian government - 130,000 NOK per year - and without any new scholarship schemes in place, this would imply a loss of around 70 to 80% of non-EEA degree-seeking students. “In the short term, this might be a fool’s bargain,” warns Gerrit Bruno Blöss, CEO of Study.eu. “Fewer students mean less money flowing into local economies. And while there won’t be many students who will actually pay fees, many operating costs will remain fixed even with smaller classes.” 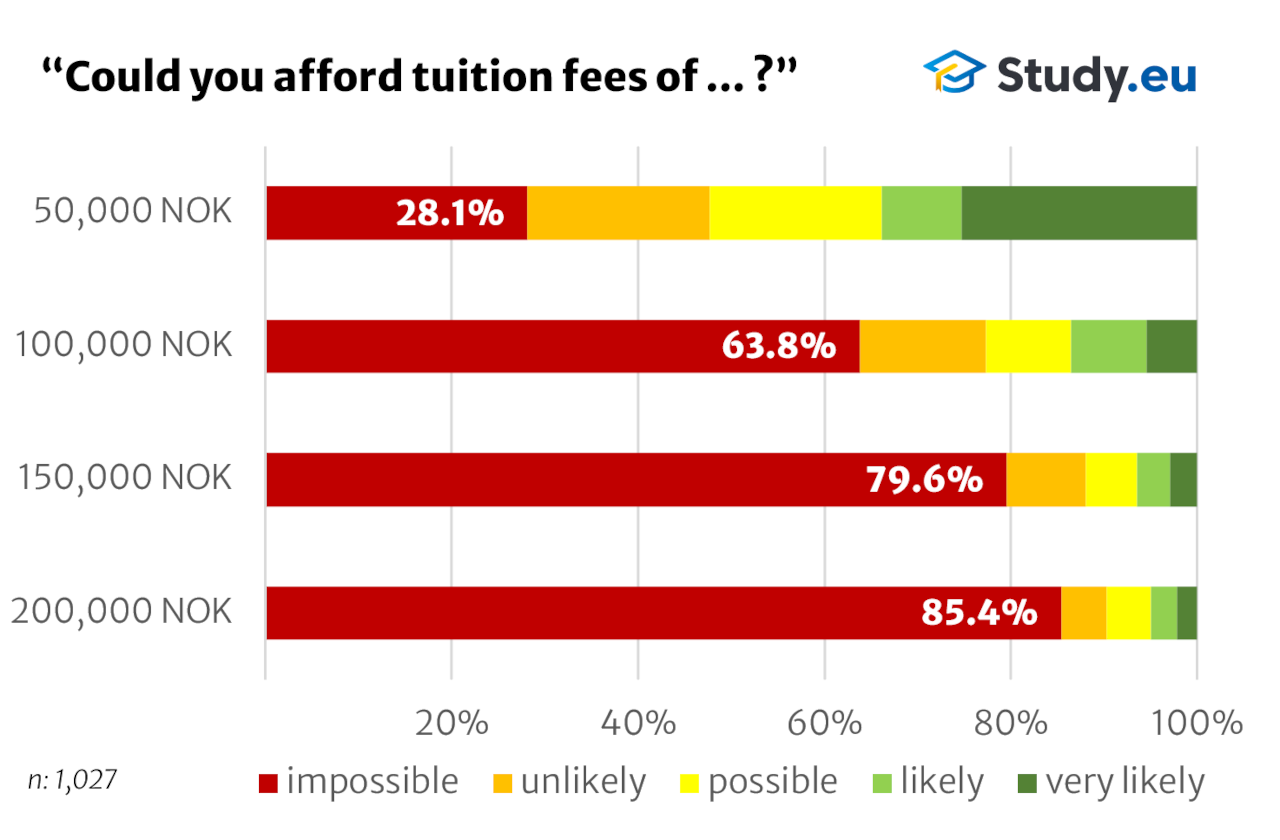 Norway’s neighbours Sweden and Finland introduced tuition fees for non-European students in 2011 and 2017, respectively. In both cases, fees led to immediate declines in international enrolment numbers with slow rebound growth over time which relied heavily on scholarship schemes and international marketing efforts. A recent report issued by the Swedish Institute (SI) quantified the economic impact of each freemoving student at 97,000 SEK per year excluding tuition fees.

Among the surveyed students, 67.8% indicated that they did not know that Norway might introduce tuition fees from autumn 2023. “International students typically plan their studies one to two years in advance. For Norway, that’s especially true as the country’s application deadlines are the earliest in all of Europe,” explains Blöss.

“But universities haven’t had a chance to properly communicate potential fees to their prospective students for the 2023 intake. Two thirds of students we surveyed hadn’t even heard of this plan at all. Introducing fees in a hurry will destroy study-abroad plans for many young people - and is likely to cause lasting reputational damage to Norway’s education sector as well as the country as a whole.” 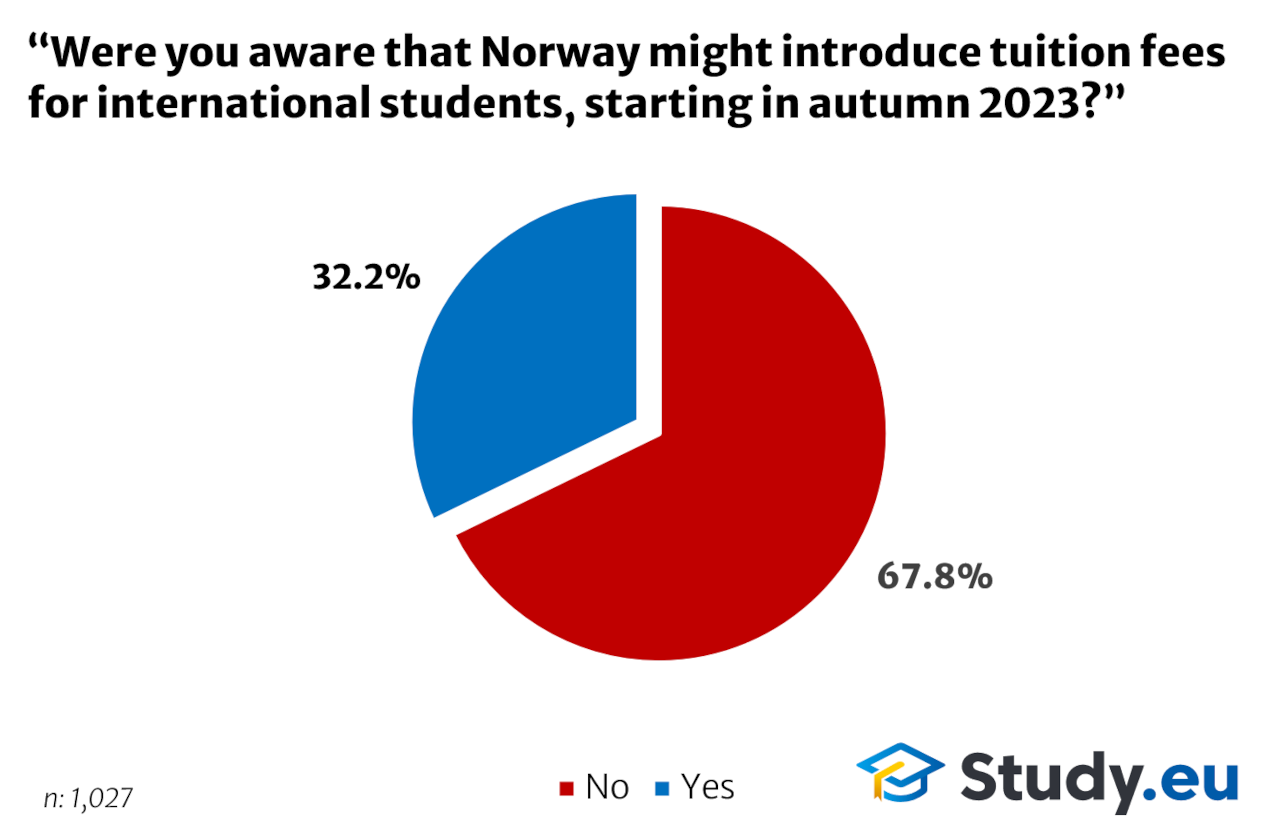 Study.eu is the gateway to universities in Europe. As the most-visited study choice platform for Greater Europe, it offers students details about more than 16,000 study programmes at more than 1,000 universities. Every year, the Hamburg-based company reaches more than 2.5 million prospective students from around the world. Study.eu closely cooperates with institutions of higher education as well as governmental organisations throughout Europe.