Hamburg, Germany, 15 March 2017. In the newly published Study.EU Country Ranking 2017, Germany ranks as the most attractive country for international students, followed by the United Kingdom and the Netherlands.

Thirty European countries were ranked based on scores in three dimensions: Education, Cost, and Life & Career. Germany achieved high ranks across the board, offering high-quality teaching at many well-ranked universities. While the UK scored well for academic reputation and the number of available study programmes, it was the most expensive country in the sample. The Netherlands, France and Sweden follow in the top 5. 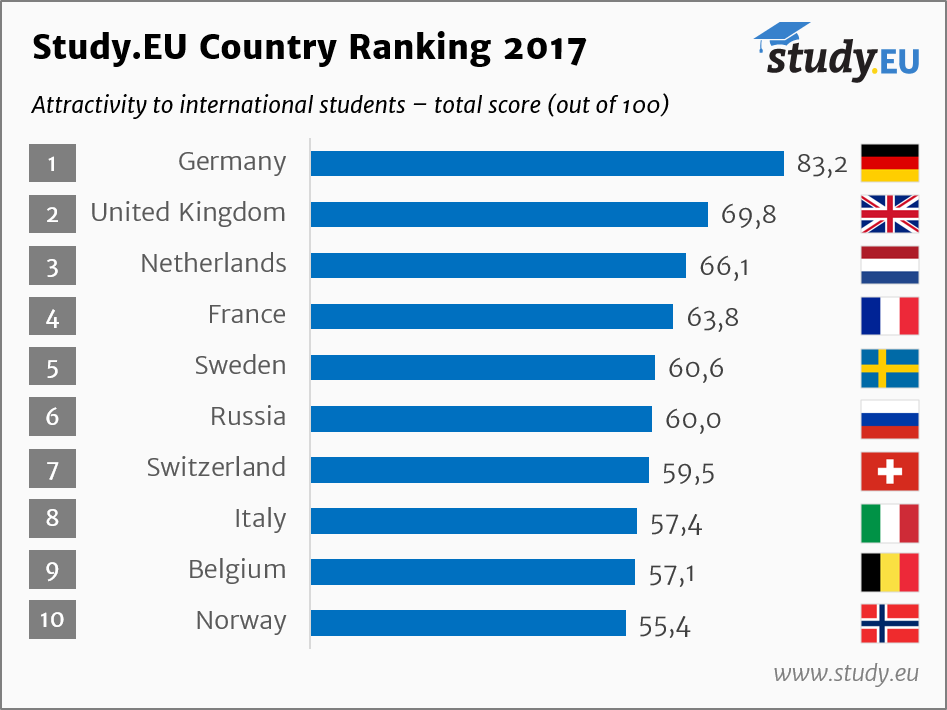 Quality & availability of education are the most relevant factors

The ranking addresses the specific needs of students seeking high-quality, accessible and affordable education abroad. Based on a range of carefully selected input factors, countries were given scores of up to 100 points in three areas:

The ranking is published against the backdrop of major political shifts in Europe and the world. “Two significant political developments will influence global higher education for years to come. First, there is the Trump presidency, driving international students away from the US to other countries – in many cases, Europe,” says Study.EU CEO Gerrit Bruno Blöss. “And then there is the upcoming Brexit, of which neither the time line nor the consequences are foreseeable. Many prospective students expect deteriorating conditions in the UK, and they start looking for study-abroad experiences elsewhere in Europe.”

Twice as many students expected to study in English by 2021

In recent years, the number of students enrolled in English-taught programmes in continental Europe has been growing at an annual rate of 13%. With the US and UK – the world's two most popular destinations – becoming less attractive to international students, Blöss expects the continental growth to accelerate: “We have seen tremendous growth over the past decade, but still only 2% of all university students in continental Europe study in English. We expect this ratio to double over the next three to four years, fuelled by a growing demand from students. This is a chance for smaller, often overlooked countries to gain a stronger international presence as alternative study destinations. At the same time, a British Pound weakened by Brexit may improve the UK's attractiveness to non-European students. We certainly have exciting years ahead of us.”

Study.EU is the gateway to universities in Europe. As one of the leading information providers for study choice in Europe, it offers students details about more than 7,000 study programmes all over Europe. The Hamburg-based company connects students from around the world with European universities, enabling them to pursue the academic path they aspire. Study.EU closely cooperates with institutions of higher education as well as governmental organisations throughout Europe.